I missed it at the time, but 19th to 26th September 2020  marked the fiftieth anniversary of my first canal holiday. Not quite my first ride on a canal boat - that was a few years earlier when some lovely boaters recognised the obvious interest of teenage lad hanging around the top of the Wolverhampton 21 in the hope of seeing a boat descend, invited him on board and took him as far as Autherley Junction where I reluctantly left them because in those days the Shroppie seemed to disappear off into deep countryside from there and I was worried about getting back. (I didn't know the area - I was on my summer holidays!).

Anyway, back in 1970 I had just completed my first year at university and managed to persuade one of my new student friends and an old mate from school to accompany me on a hire boat holiday on the Grand Union Canal.

I have no records of the trip other than a few photographs. The first was taken by my new university mate and shows the rest of the crew (I'm the one with the hair - well it was 1970!). I had hoped to be able to show a present day photo of the location from Street View, but the relative positions of the towpath and the railway line are wrong, and the boat would be pointing the wrong way so I suspect it may be somewhere further north. I do have a record that the trip was "From Berkhamsted to Long Buckby via Foxton and Coventry" but what I don't have is a note of the hire company. The clues are there in the hand-over points and the boat name if anyone wants to try and work it out.
We were all novices, although I had mugged-up on the theory but I don't recall any problems. In those days the canals were quiet in September and I think this shot of Stoke Bruerne locks captures the lonely and somewhat melancholy atmosphere that so attracted me to the cut in the first place.
I don't know whether the hire company expected its clients to take a week getting to Long Buckby but that obviously wasn't far enough for us and we continued firstly to the top of Foxton locks, which were similarly deserted, and then back to the Oxford Canal and on to Hawkesbury Junction continuing down to Coventry basin before retracing our steps to Long Buckby.


My only disappointment was that we didn't see any working boats on the move. I suppose we were just too late for that. In fact we saw very few other moving boats as I recall, although we did pass a pair of hotel boats (names not recorded I'm afraid) on the Leicester Section.
As far as I know, neither of my companions ever ventured onto the cut again, but I spent most of the following academic year helping to revive the university Inland Waterways Society which had become dormant when the founder members lost interest. This was successful and next year will mark another fiftieth anniversary - that of the first Salford University Inland Waterways Society Boat Trip - when we hired "Grebe" and "Teal" from Willow Wren in Rugby for a week's trip around what is now known as the Warwickshire Ring (plus a side trip to Coventry basin as I enjoyed it so much the previous time).
Several of the original crew intend to mark the event with a re-creation. Willow Wren Hire Cruisers are still around and we've even managed to hire "Grebe" again, although it's not the same boat! The date is necessarily flexible at this stage. We have a provisional booking for April with an increasingly-likely fall-back option of October. (The 1971 trip was over the Christmas/New Year week). The route will be the same, with the exception of the start, when we apparently got as far as Brinklow on the first afternoon then changed our minds and reversed direction to do the ring clockwise instead, although nobody can remember why!
No doubt I'll blog about it at the time.

On the Austrian Straight and Narrow: Final Part

No need for a map for the first part of today's travels. I'd planned to end my holiday with a few days in Vienna (Wien) to sample the delights of the Austrian capital. I left Graz at 09.12 on an "Eilzug" (semi-fast) to Bruck an der Mur, changing there onto the "Carinthia" express along the Sudbahn to Wien and arriving mid-morning.

Wien has a whole host of tourist attractions and I was determined to see them all: - the S-Bahn, the U-Bahn, the Lokalbahn, the Stadtbahn and the double-decker buses, which the city is one of few outside the UK to have.

According to the diary I don't seem to have done anything else in Wien, although I must have had a bite to eat somewhere before joining the "Wien - Oostende Express" that was due to leave the Westbahnhof at 20.50, but was delayed by 20 minutes awaiting the through carriages from Budapest that were running late, despite having an hour's recovery time at Wien!
The "Wien-Oostende" was one of a huge number of international overnight trains that ran throughout Europe in those days. The advent of low-cost airlines put an end to most of them in the early part of this century, although in more recent years a revival has begun led by the Austrian State Railways.
Taken from a slightly earlier Thomas Cook timetable here (on page 468!)  is the route and schedule of the Wien-Oostende Express: 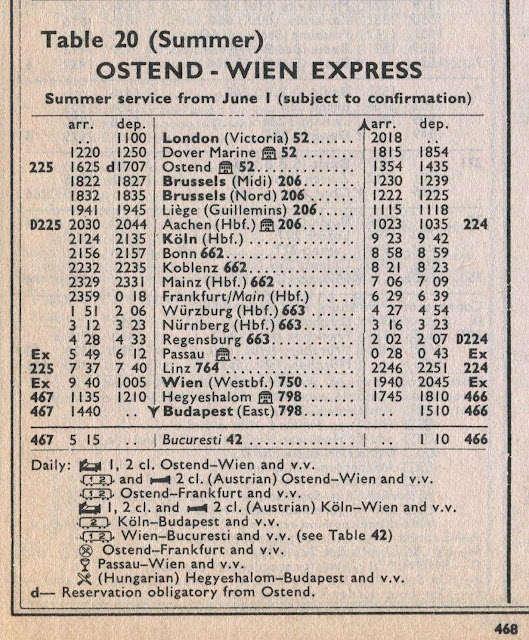 As with all the international trains that terminated at Oostende, a casual glance at the timetable suggests a through train to London, with no mention of the need to change to a ferry between Oostende and Dover!  I suppose that in those days it was a reasonable assumption that "everyone knew"!  You also have to look closely to ascertain that the portion of the train that starts at Budapest goes only as far as Köln (Cologne) and that there is apparently no catering on board between the "light refreshments" car coming off at Passau and the Restaurant Car joining at Frankfurt. Presumably, some people would find it important to know that the through carriages and couchettes are "Austrian" rather than German or Belgian, although the nationality of the sleeping cars isn't divulged.
Brussels
The original plan was to take full advantage of the flexibility of rail travel to alight in Brussels at 1222, where Mark was going to come from London - on the Jetfoil - and join me for a pub crawl. But with the wisdom tooth troubling me, at some stage during the previous few days I had decided to cancel this arrangement and come straight home.  Even though I was now feeling very little pain in my mouth I was too tired to change my plans again. Of the previous ten nights only one could be described as "a quiet night in" and I had done a lot of travelling. Instead I rode through to Oostende and joined the "Prins Albert" for a crossing that I noted as "fairly rough in poor weather" and with "the usual chaos in getting off the boat at Dover", which I think refers to the practice of requiring all foot passengers to leave the boat via a single gangway on to the quayside where priority was given to cars coming off the boat from the car decks.
Mark met me at Victoria, where I arrived seventeen minutes late (a three minute improvement on our departure from Wien!) and I stayed at his flat in Tooting that night, but only after "a pub crawl of the west end"!
THE END.
Except that tucked away at the back of the notebook is section on "the cost of the holiday"
The Austria Ticket, that I used for travel around the country cost £51.40
Train and Couchette tickets from Dover to Feldkirch and
Wien to Ostende came to £111.00
The coach from London to Dover was £3.50
and the return train was £7.00 showing that I didn't buy through tickets from London after all.
Travel Costs therefore came to £172.90
Seven nights in hotels in Jenbach, Salzburg, Graz and Linz cost a total of £65 (so not exactly 5-Star then!) making the cost of the holiday (excluding meals and, er..drinks) £237.90.
As I had been quoted £283 by the DER travel agency for putting together and booking a similar itinerary I was well pleased!
at October 20, 2020 3 comments:

On the Austrian Straight and Narrow Part 10

Although this holiday was about seeking out "transport oddities" in terms of location, track gauge or antiquity, I very much preferred those lines that were nevertheless fulfilling a genuine transport role. Today's journey, whilst still following that rule, also included what might be termed a "heritage" or "preserved" railway that I decided to include largely because it had had a good write-up in the "Austrian Travel Wonderland" book that had inspired me to visit Austria in the first place.
There is no mention of my emerging wisdom tooth in the diary, so I can only conclude it wasn't bothering me too much. Graz had another rail company  - the "Graz-Köflacher Eisenbahn" - which was government-owned, but run separately from the ÖBB no doubt for very good historical reasons. I hadn't been able to find space in the schedule for a ride to Köflach and back but I was able to walk over to the GKE station and have a quick look around.
Therefore, it wasn't until 11.57 that morning that I left Graz on an ÖBB local branch line train to Gleisdorf and a five-minute connection on to the Steiermärkische Landesbahn's "Weizerbahn" line and a train to Weiz.  The "train" consisted of a single ancient coach hauled by a centre-cab diesel loco, which due to absence of raised platforms at the stations seemed to tower over the passengers and appeared much larger than it actually was.
The section of line on from Weiz to Birkfeld was another 760mm narrow-gauge line known as the "Feistritztalbahn". Whether it still saw a regular passenger service I'm not sure, but on the occasion of my visit I was able to catch a steam-hauled train that left Weiz at 13.20 for the 65-minute run to the end of the line at Birkfeld.
The target market of the line's operators was obviously a little wider than just railway enthusiasts and the trip was advertised as not just a "Dampfbummelzug" (slow, steam tourist train) but also a "Folk Music Train", which meant live Austrian accordian music and folk singing, with which all the children on the train happily joined in!  The Austria Ticket was definitely not accepted on the Feistritztalbahn and the round trip set me back 90 schillings, which easily converted to  £4/10/- in old English money.
The timetable allowed two hours at Birkfeld and most of the passengers decamped to one of the many restaurants in and around the station for a meal, although I settled once again for a picnic sourced from a local shop.
I've no idea what I did with the rest of my time at Birkfeld. There was the option of getting a post bus directly back to Graz, which despite not leaving until 1655 would have got me back earlier, but in the end I chose to return by steam train and back the way I'd come. The Landesbahn train from Weiz had gained a few freight wagons to add to its single coach and was now running as a "mixed train" (passenger and freight) and after changing back onto the ÖBB at Gleisdorf I was back in Graz by early evening.
to be continued...