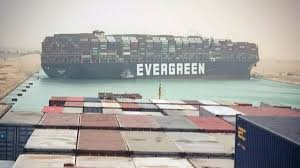 With the container ship "Ever Given" now re-floated and traffic on the Suez Canal on the move again my old boating chum Steve has issued me with what he's calling the Evergreen challenge: to own up to my own boating adventures that have resulted in a total blockage of the canal.

My early boating was done on hire boats, which were always 70-footers and, in those days, usually conversions of deeply-draughted working boats. Coupled with the poor state of maintenance of what were still lightly-used canals and our own inexperience as boaters, running aground was not uncommon. The biggest incidents however usually involved us getting stuck in bridgeholes: not a problem on the Suez Canal but certainly a potential cause of delay on the narrow canals. 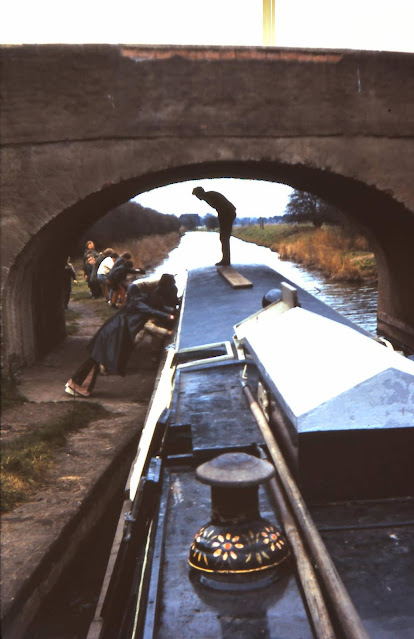 One of many such incidents occurred aboard the Tardebigge Boat Company's "Benbow", itself a former working boat, on the Worcester & Birmingham Canal in 1972, which required most of the crew to be put on the bow rope and the rest to rock from the side, except of course for the obligatory person on the roof to shout instructions.

We were, however, just like the "Ever Given", quite capable of running aground in the middle of the channel, which needed much engine-revving and shafting from the bow to get us free.

Some of the greatest difficulties occurred aboard "Gardenia", which still was a working boat and loaned out to Waterway Societies as part of the Keep the Channel Clear campaign in the early seventies. The boat was ballasted to achieve a draught equivalent to a load of 15 tons with the idea being that if it could get through, then everything else could as well.

Once again, bridgeholes were a major problem, especially if, as here at Hopwas on the Coventry Canal, a lorry load of bricks had been dumped in them

Here we got so stuck that we decided that the only way through would be to remove the bricks from beneath the bow one-by-one, prising them loose with our feet.  This took most of the afternoon and attracted the attention of a passing reporter from the Wolverhampton Express & Star who duly wrote up the story in the following day's edition. Despite it being August, I can only recall a small number of occasions when we had to pull Gardenia back from the bridge to allow other, shallower-draughted craft to pass.
Later that year, with the Stoke on Trent Boat Club I took Gardenia up the Caldon Canal, which at the time was officially closed. Despite reducing the draught, by the simple expedient of manually unloading five tons of concrete slab ballast (and reloading it afterwards) we got no farther then Stockton Brook, where we spent most of a day and had to resort to a manual winch we'd brought along to make any progress at all.

Shortly after the second photo was taken the winch operator trod on a wasps' nest, which improved his sense of humour no end!

I had far fewer such incidents with Starcross. As a purpose-built leisure boat she drew no more than a couple of feet and, of course, the canals were more highly-used and in better repair by then. Nevertheless, we did come across a few "canal-blocking" incidents, most of which involved other boats.
The steerer of this unidentified boat on the Llangollen Canal at New Marton seemed to be having difficulty finding his way into - or was it out of?- the lock. 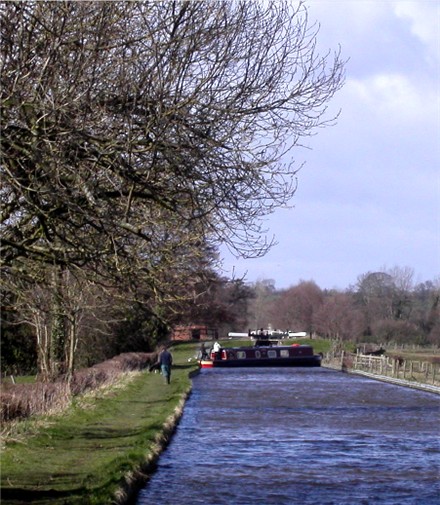 Fortunately, I had already passed him and was heading in the opposite direction.
At least he could blame the crosswind on this relatively exposed section. Not so the crew of the boat I came across blocking the canal nearer to home on the approach to Shelmore embankment on the Shropshire Union. 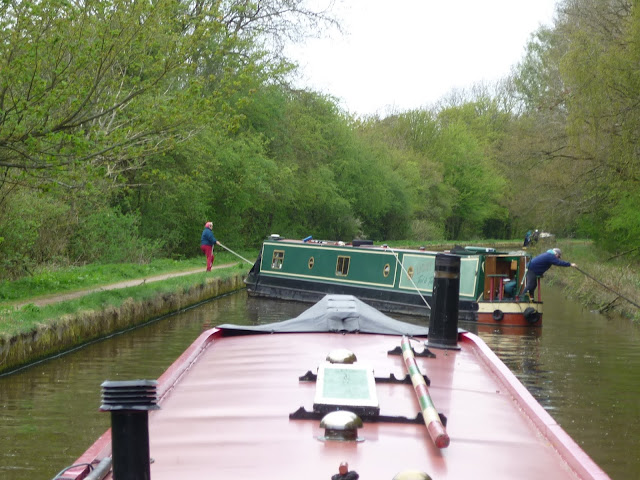 Not only had they run aground, they had also managed to get the centre rope wrapped around the prop! I did offer to stop and help but they said they could manage, so as soon as the gap was big enough to allow Starcross through I carried on and left them to it.
One time we were asked to stop and assist was at Henhull, farther north on the Shroppie, where a boat attempting to moor had got caught in a crosswind. 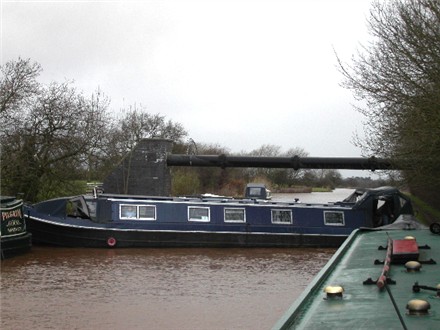 The more experienced of the two crew members had made the elementary mistake of jumping for the bank with the bow rope rather than a centre line and the second person didn't have the skill to manipulate the engine control and the tiller to bring the stern in.  The solution was for Starcross to act as a "stern thruster" and shove the back end into the bank so that the first crew member could get back on board.
I must confess, however, that there was at least one occasion when Starcross could have ended up sufficiently stuck to cause a problem approaching Ever Given proportions. However, as it was on the exceedingly little-used waterway known as Kyme Eau in Lincolnshire the effect on other traffic would have been minimal.
Having struggled single-handedly up the Eau from its junction with the River Witham in a weed-infested channel and against a stronger than expected stream I began to realise that with water levels being high I would have trouble getting under a low bridge identified in my Nicholson's Guide. To assist boaters a loading gauge had been placed under the previous bridge and the understanding was that if you couldn't get under the gauge without hitting it, you wouldn't get under the following bridge. 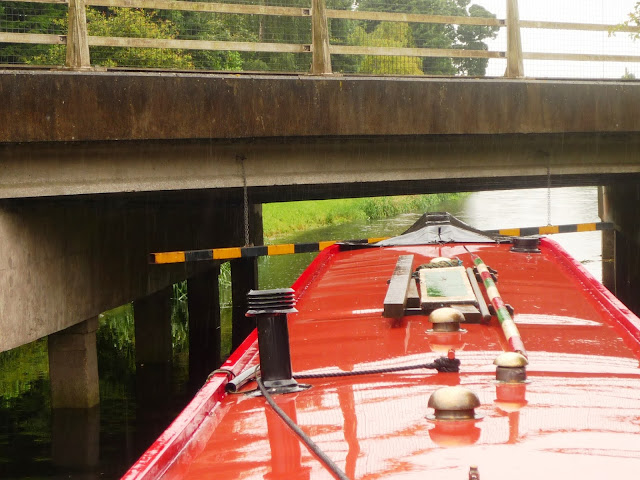 On arrival at the gauge it was immediately obvious that I couldn't get through. It  had taken me over twice as long to get this far up the Eau as I'd expected and as I clearly wasn't going to get any farther it was time to abort the mission.  But there was nowhere to turn round!
Kyme's Eau is narrow and winding and the junction  with the Witham was five kilometres and one lock back the way I had come. There was no option but to set off in reverse, allowing the current to do the work with an occasional burst on the throtttle to steer.
Fortunately, I remembered that about a kilometre or so back I had passed what looked as if it might be a winding hole, or at least somewhere I could use as one to turn.  By now, the stream was quite strong and I thought that attempting to turn in the conventional "nose-in" manner could prove problematical as I would have to fight against the current to bring the boat round.
The only way to turn safely appeared to be to go against all received wisdom and put the stern into the winding hole and hope that it wouldn't be so shallow that I would end up completely stuck. With no one else on board to discuss this with and with the winding hole rapidly approaching I made the decision to go for it. 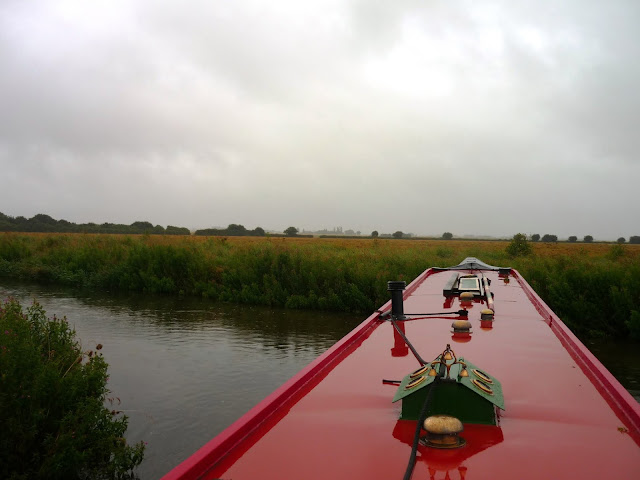 I needn't have worried. The stern went in neatly right up to the bank and before I had time to think the current was sweeping the bow round. The channel was just wide enough to take Starcross and I was facing the right way and back off to the Witham, feeling mightily relieved.
So that's my "Evergreen Challenge" or at least everything I'm owning up to.  It's customary with these interent challenges to pass the baton on to someone else.  I won't single out anyone but if any of my boating readers want to take up the mantle I'm sure we'll all be happy to see it.
at April 01, 2021

I plead guilty, your honour! Yes, I was the miscreant who, in a moment of distraction, inadvertently steered "Starcross" into some overhanging trees, somewhere on the Grand Union I think. I was perhaps going a little too fast and in retrospect should have thrown it into reverse as soon as I realised. Fortunately you had a handsaw in board, Jim, and you cut our way out. But if I had the hindsight of experience, the incident might not have happened. Story of my life!

I'll point it out before anyone else does that "throwing it into reverse" wouldn't have done much good! The only way to have avoided that collision would have been to not have steered for the bank in the first place! As I recall, it was partly my fault for passing you a cup of tea at exactly the wrong moment.

A brilliant article, thanks! It being April 1st, you could have written a spoof.

The Guardian came up with its own April 1st news item, on a proposal for a second Suez Canal. Given that it was written by 'Flora Lopi', it also listed a contractor named 'OFP Lariol'. If that wasn't enough, it invented a UN committee 'for Trade Routes Uniting Economies', or UNTRUE for short.

Steve,
It was the bit about the UK offering its expertise in developing major infrastructure projects such as the Irish Sea bridge that gave it away for me! That and the suggestion that construction of the canal would lead to a lowering of sea levels in the Med. A good effort by The Grauniad, but they'll never surpass San Seriffe!

Jim
If I can work out how to post the pic here, I will. I found myself well and truly aground and at a jaunty angle in late summer 2019, at Newton Heath whilst descending into Manchester on the Rochdale. It's the area where it had been tarmac'd over to leave about 6ins of flow, and when restored only part of the channel, towpath side, had been dug out. The edge was supposed to be marked, but the wooden markers were missing/rotted away, so whilst happily cruising along what I thought was the centre of the channel, suddenly came to a grinding halt with a considerable list! I was able to swing the bow over with the thruster, but couldn't get her off the old tarmac. Even helpful passers by were unable to help me haul her free, so resorted to the boys in blue who trundled out in fine form and dragged her off using their lorry! Didn't get a photo of that, I was somewhat busy! And they disappeared as soon as I was free - home time!

I have of course quietly failed to mention the infamous Autherley Junction Incident. As I recall, I was confidently steering northwards, vaguely aware that at some point we were due to turn left to join the Shroppie, but not sure quite how far. Distracted or absent-minded, I missed the junction completely, to the evident consternation of crew members patiently waiting at the first lock. Realising my faux-pas, I had to shame-facedly reverse a couple of hundred metres to recover the planned route. One of us amused us later by humming the tune to "Sailing By"!