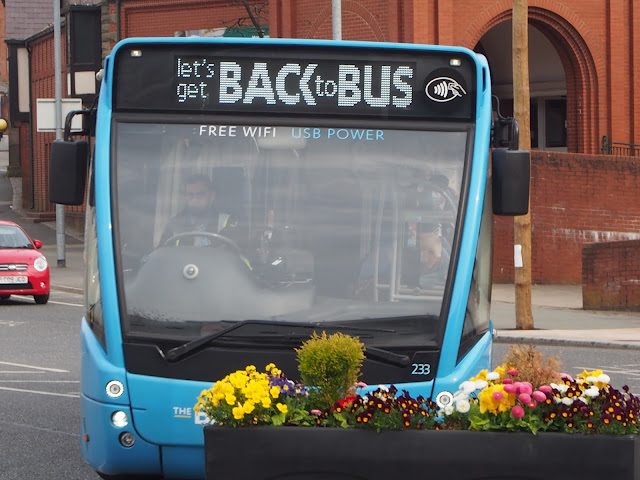 It's been a while - a very long while, what with one thing and another - since I last had a day out on the buses.  I've caught the bus back from town a few times and I did manage a ride to Morecambe and back (all of six km. each way) but  Tuesday saw the longest bus journey I've made in over a year!

As well as buses (and canals of course) one of my interests is street markets, so where better to head for on a Tuesday than "Lancashire's Market Town" 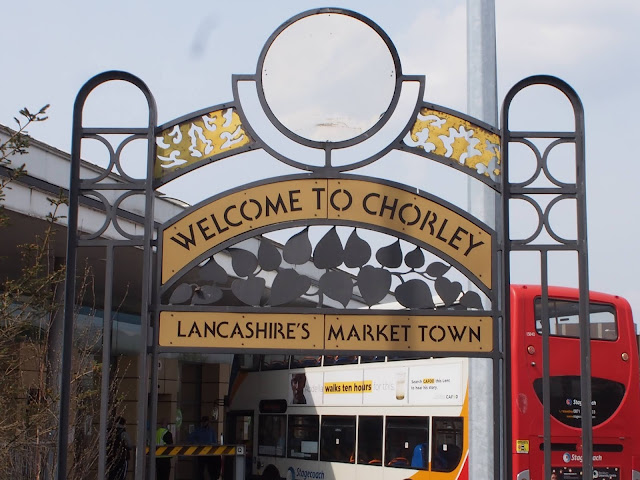 I can get there on just two buses from the end of the road, although I must admit that given the choice  from Preston of the direct bus along the A6 or the alternative that wanders around Leyland and South Ribble those who know me will be able to guess which one I took.

Chorley is a great place for a street market fan especially on a Tuesday, the town's main market day. Last time I went, a few years ago now, the market was being held in a rather windswept car park on the edge of town and consequently I was disappointed. But that was presumably a temporary occurrence as this time it filled the main streets including, naturally, Market Street, which was once part of the A6. 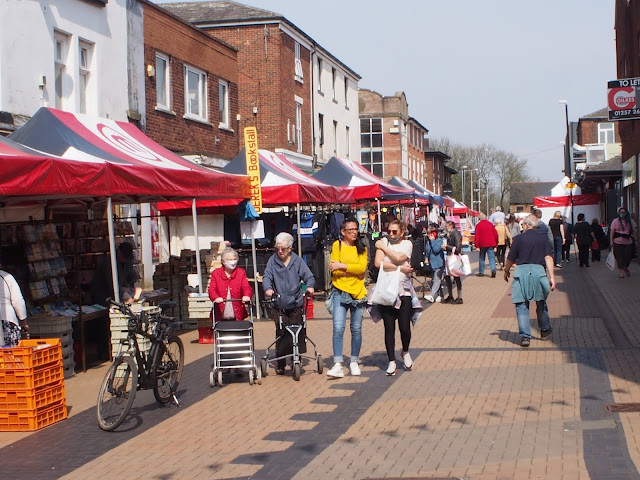 As well as the street stalls, there's also a market hall. 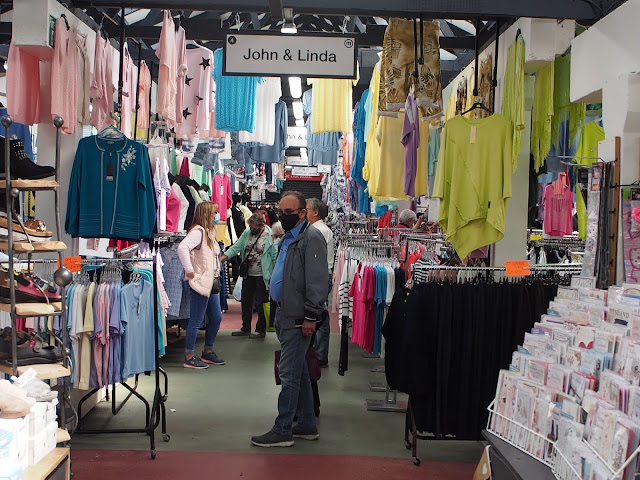 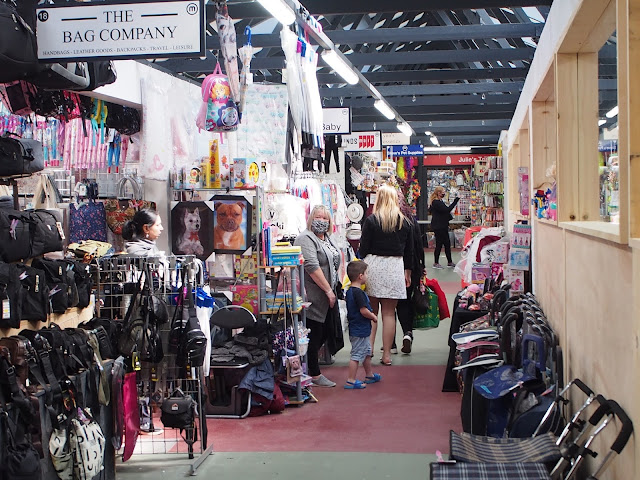 Much as I enjoy markets and try to support them, it can be difficult to find things to buy. Chorley market, especially the indoor bit, must be heaven for women seeking cheap clothes, but there wasn't much for me. There was a cheese stall - and a fishmonger  - but I still had quite a bit of bus riding to do and the thought of lugging  several hundred grams of Tasty Lancashire and smoked Haddock around on the buses for the rest of the day didn't appeal.  The fruit and veg stall was tempting. . . 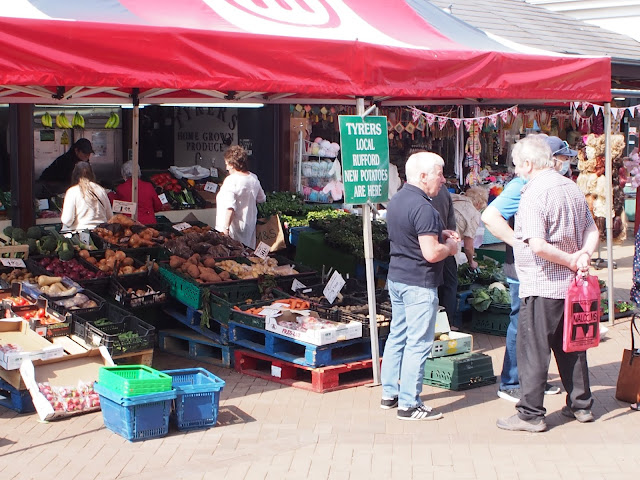 . . . I really fancied some Rufford potatoes!  But again they would have been heavy to carry and I usually do the veg shopping on Lancaster market on a Wednesday anyway.  I did manage to get a bag of Uncle Joe's Mint Balls ( a famous Wigan delicacy) from the sweet stall though.
As you can see from the photos, shoppers have returned to Chorley's streets with a vengeance, which might be why the mannequin outside Slack's Farm Butcher's shop was dressed this way:
Two hours passed quickly enough before it was time to return to the bus station for the next stage of the journey - on the Blackburn Bus Company's service 24 which would take me back to its home town.
Once free of the Chorley urban area, the 24 follows a scenic route along the edge of the West Pennine Moors, with distant views of the higher moorland to the east. Fortunately I had a double-decker on which to appreciate it fully.  The intermediate villages are typical moorland stone-built affairs, in contrast to the brick found in lowland Lancashire. Wheelton was particularly attractive, but most fascinating was Abbey Village, an isolated community in the middle of the moors, where an enormous former mill dominates the scenery, whilst the former mill workers' houses are strung out along both sides of the main road.
We crossed the Leeds & Liverpool no fewer than four times on the journey. Once on the outskirts of Chorley at Botany Bay, where there was a pub called "The Lock and Quay" (but no lock or quay!);  twice in Feniscowles and finally once again towards the top of the locks in Blackburn.
I'd never been on the 24 before, but I was glad I had - a classic example of a bus route that takes you to places you would never see if you travelled between the two towns by any other means.
From Blackburn I had a choice of no fewer than three routes back to Preston. The most scenic was Preston Bus service 45, which followed an even more meandering route through the Ribble Valley. Stagecoach's 59 was the most direct - along the Preston New Road  - but when that hadn't turned up by its scheduled time, the "First Rule of Public Transport" (If it's there - and it's going your way - get on it!) applied and I took the Burnley Bus Co.'s 152, itself running eight minutes late, back to Preston.
By the time we got there, we were even later than we had been leaving Blackburn, not helped by sitting on the stop before the bus station for several minutes whilst my comfortable 20 minute connection for the Lancaster bus became a potentially nail-biting four minute one!
Preston's bus station is huge, although these days buses only use the far side of it. 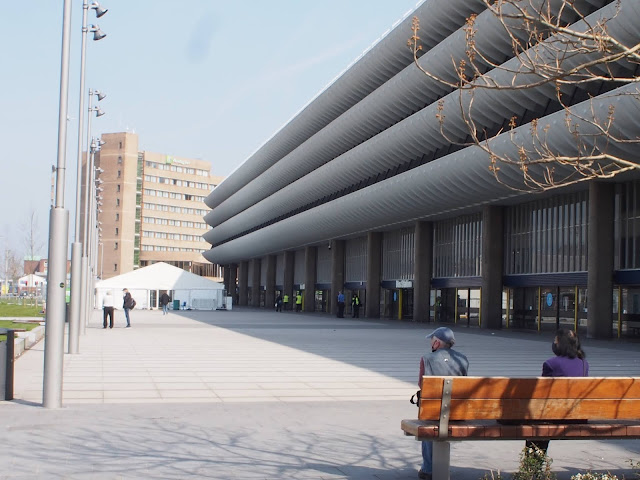 Inevitably, the 152 arrived at one end of it, whilst the Lancaster bus left from the very farthest stop at the other one. Helpfully, the powers that be had put a Covid-secure one-way system in place, enforced by tape and barriers, which meant I couldn't follow the obvious and direct route through the station, but I made it with under a minute to spare, although I don't think I stuck strictly to the rules.
The 16.45hrs service 41 from Preston to Lancaster is a most frustrating bus!  To start with, it gets an additional ten minutes running time to get out of the city due to expected traffic congestion. This it doesn't really need and consequently we spent about seven minutes waiting at the side of the road in Broughton until it was time to proceed.  The first time this happened, I wrote to Stagecoach and suggested that this was a bit silly and that they could reduce the extra running time. They replied saying that they had asked the drivers if they always had to hang around in Broughton and they had all said that they didn't!  (They could have also told me that the Pope was a Roman Catholic and that they were well aware of what bears did in the woods!)
Anyway, while we were waiting a 41 bus going the other way appeared, so I took its photo.
Despite - or possibly because - the road through the village having been traffic-calmed the bus stops are directly opposite each other, but when one is occupied by a bus waiting time for seven minutes, buses coming the other way have to stop back from their stop, otherwise the road would be completely blocked.
Once moving again, our driver hammered along the A6 to Garstang, where we had another few minutes to wait, and then again to Galgate by which time I was nearly home. But the 16.45 had another trick up its sleeve. Lancaster University is 4.5km south of the city just off the A6. Despite having a local service of 12 buses an hour to and from the city centre it is still necessary for some long-distance buses to be diverted via the campus to cater for the numbers travelling. Service 41 is one of these and again, extra running time is allowed for buses to follow the diversion. The 16.45 from Preston gets to the University at around 18.00, which is a peak "going home time" for the many hundreds (thousands?) of students who live in the city centre. At "normal" times, the queues for buses can look like this: 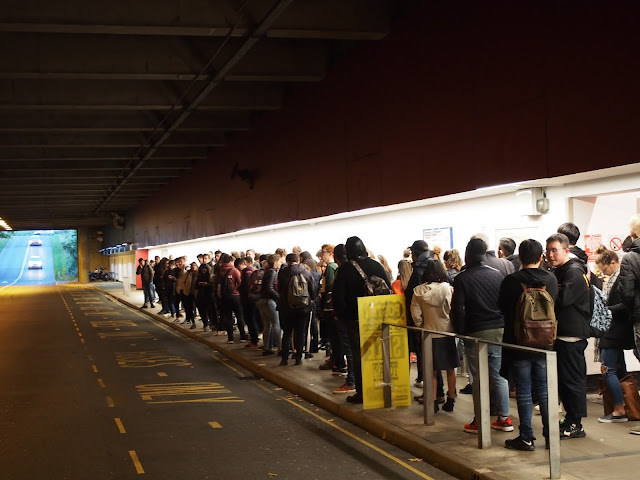 and even more time is allowed to get them all on board with fares collected or tickets and passes checked. At the moment, of course, there are hardly any students travelling, so the 16.45 sat on the stop for another 8 minutes!  I eventually got off at my local stop exactly 90 minutes after leaving Preston. We were exactly on time as far as the timetable went, but as at other times of day the journey can take an hour-and-ten (and in the evenings under an hour) it had seemed a long and tedious journey.
Still, it was good to be back on the buses after a long time and I'm looking forward to doing it again soon.
at April 22, 2021

Hi Jim
I'm not quite there yet with buses and trains, but second jabs are due tomorrow, so maybe in a couple more weeks - see how things go.
Cheers, Dave

Ah - Chorley! That town was on the route of the Bogle Stroll, the annual 55 mile charity fundraising event I participated in twice during my time at Salford Uni. Did you ever get involved? The first time I was a support driver and got completely shattered. The next year I walked it, which was much better. I do remember crossing the canal at Chorley.

Yes, Chorley must have been a landmark - and about the halfway point? My only involvement in the Bogle stroll was as a bus marshall, which involved riding shotgun on the buses patrolling the route to pick up the defeated!