A visit to my local Oxfam bookshop to see if they would be interested in taking a collection of waterway magazines off my hands as part of a general clear out to create a bit of space on the bookshelves here in Starcross Towers was only partially successful: yes, they would take them, but then I bought three books on the way out! 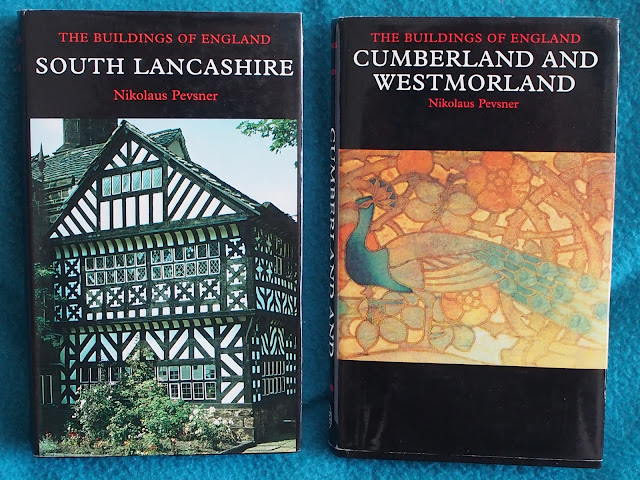 Having bought my first ever Pevsner during last year's lockdown, which covered my home area of North Lancashire, I was pleased to obtain these neighbouring volumes at about 10% of the price of new ones. They are a different edition to one I already have and a different size - smaller and more portable for taking with me on bus trips or cycle rides.

The "South Lancashire" volume covers Bury (Pevsner's volumes were originally published before the invention of concepts such as Greater Manchester or Merseyside) so I was able to discover that the imposing Town Hall I photographed on a bus day out in April was built in 1936 and has "little in the way of decoration or individuality".

That's a matter of opinion, but Pevsner is nothing if not opinionated when it comes to architecture.

It was Sarah on Chertsey that started me on photographing town halls. When I posted a photo of Warrington Town Hall that I'd noticed when walking from Warrington bus station to the railway station on my way home from Starcross' mooring at Anderton she commented that she did "like a bit of municipal grandeur".  Read the post to see why.  The north of England seems to specialise in such "grandeur" and I now have a growing collection.

The third book was on Stagecoaches: 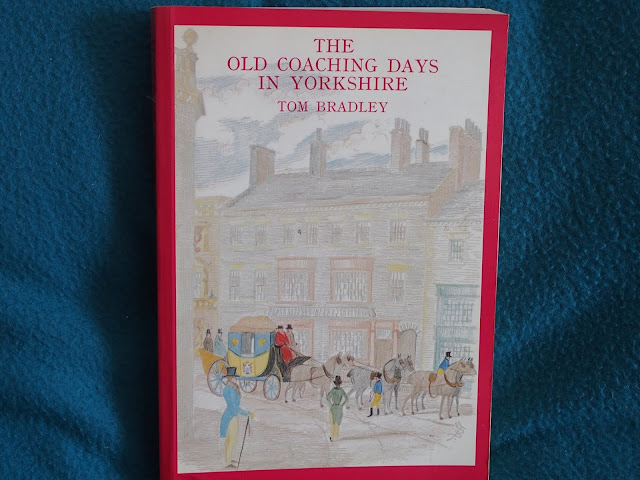 Although I take an interest in all forms of transport, I am particularly fascinated by the Stagecoach era. Very little seems to have been written about it, which is a shame as for almost 100 years coinciding with the golden age of canals it was the backbone of the country's passenger transport system.

I'd love to know more about how it was organised and run. Just how did a multitude of small scale individual proprietors - and one large national undertaking, the Post Office, manage to run a network of services that covered the country, year-in, year out, providing scheduled services that were advertised with departure times down to the last minute on the primitive roads of the day with similarly primitive technology involving wooden-wheeled vehicles reliant on horse power?

Drivers, guards and horses were all managed separately. Horses had to be changed every dozen or so miles and drivers and guards were also relieved en-route although not necessarily at the same points, after which they presumably had to get home again. It must have been a nightmare to organise.

And what of the passengers? The carrying capacity of the coaches, especially the Mail Coaches, was small, necessitating people booking in advance. "Bookings" would have had to be recorded, by writing the passengers' names in a "book" held at a central point, but how did the names get into the book, which was held perhaps several hundred miles away? And how did the drivers know who had "booked" and was therefore entitled to be picked up bearing in mind that the fastest means of communication between places in those days was the coach itself?

Of course, the coach industry underwent continuous improvement during its lifetime with journey times coming down from days to hours and the comfort of vehicles increasing. By the 1830s it must have seemed as if the improvements would continue and the coaches would go on for ever: a little over 10 years later they were finished!

I don't know if my new volume will throw any light on these questions, but one thing I do like about it is the Directory of Coaches from Yorkshire Towns. In 1827 the "Comet" left Leeds at 12.45pm and ran via Wakefield, Barnsley, Sheffield, Nottingham, Loughborough, Leicester, Market Harborough, Northampton, Dunstable, St. Albans and Barnet and arrived at the "Bull & Mouth" hotel in London the following afternoon at 3pm.  Twelve years earlier, the "Eclipse", running via Ferrybridge and Doncaster (and down the Great North Road) had taken seven hours longer and required two nights aboard the coach!

Some coaches operated in conjunction with packet boats.    The "Aire & Calder", the "Blucher" and the "Ebor" all  ran daily between Leeds and Selby "in connection with the Hull packets"

There was even competiton akin to the early days of bus deregulation. When in 1838 the "British Queen" began running between Leeds and Manchester at a fare of 12/- (inside) and 8/- (outside) the existing proprietors banded together to run the "Victoria" at the same times and route but at half the fare.

No doubt there is much more of interest within and I will have to judge whether I can justify bumping "The Old Coaching Days in Yorkshire" up the queue of books waiting to be read "during lockdown" that includes a 447 page volume on the history of "The Manchester Bus".

In the meantime, if anyone wants a set of "Narrowboat" magazines from Issue 1 up until Winter 2014, some bound, some not and can either collect them from Lancaster or meet the cost of getting them to you, please get in touch soon.

I also have an interest in stagecoaches, having spent my childhood in Hounslow. It was on the stagecoach route from London to the west and south-west, and Hounslow Heath provided rich pickings for the highwaymen (and women?).

My ancestor John Down was a wheelwright in Lyme Regis, helping to maintain the stage carriage services between there and Axminster until the railway finally reached the Lyme Regis. His son Daniel had seen the 'writing on the wall' by joining the navvies building railways in Lincolnshire.